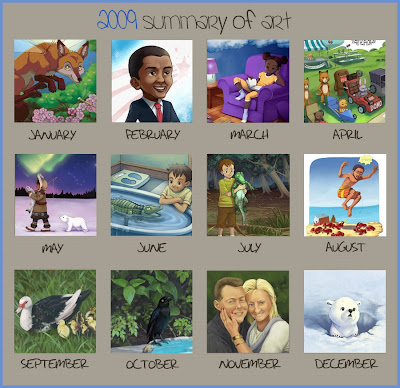 In January and February, I was finishing up my how-to draw book, Draw Furries - How to Create Anthropomorphic and Fantasy Animals (more info). I started experimenting with coloring over pencil lines (as opposed to inked) in Draw Furries. I thought it wouldn't work because I'd tried it in the past and it looked sloppy (for example, pencil illo from 2006), but as it turns out, that's just because the pencil lines were sloppy. My line art is much cleaner and refined now, so adding colors works fine (and suits me because I enjoy penciling a lot more than inking).

In March, I began working on my children's illustration portfolio, which I continued to work on till August.

In April through June, I worked on two chapters of Domo: The Manga for Tokyopop. With it came an opportunity to try my hand at color comics, something I had been thinking about doing for a while. I really like the results. I still love black-and-white comics, but I don't think one should limit themselves to black-and-white if color makes sense for the project.

I started doing 1-hour speed paints in June, around the time I started the Boy and Gator illustration series, when I realized that I didn't have a good technique for painting trees, and as a result the background in this image was taking me much longer than it should. Since then, I've tried to do that daily speed paints, when time allows, and have practiced everything from water reflections to realistic portraits of dogs.

In July, not pictured here, I did some Sonic the Hedgehog "Off Panel" comic strips for Archie. That was a blast from the past for me, as I spent a lot of my teenage years with my cousin making little Sonic fan comics. I think the strips are currently running in the back of the Sonic the Hedgehog comics, up through issue 208.

In September through November, I turned my focus onto a new comic project, and started doing a lot of research and development for it. Writing, sketching, character designs, etc. Because of this, the only color work I did was in the form of 1-hour speed paintings. November's speed paint is a Christmas gift for my aunt.

Finally, in December, I finished my promotional poster illustration for The Last of the Polar Bears - the new graphic novel I'd been developing the last three months, and will be continuing to work on in 2010.

Here's links to the illustrations featured in the 2009 Summary of Art: