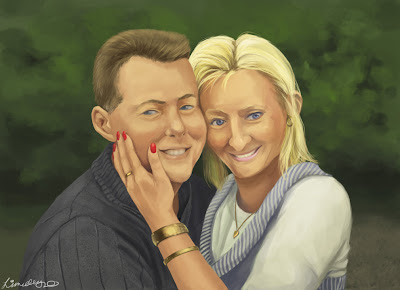 This started out with the intention of being a speed paint, but became a "slow paint" when I realized that I'd need to be more meticulous to get an accurate likeness. I've been picking away at it slowly for about the last week. I believe I put about five or six hours into it total. It's a Christmas present for my Aunt Carol, of her and her new boyfriend (reffed from a photo). She wanted it 8.5"x11" size, which also made it more time-consuming (previous speed paints were done 4"x6").

The most difficult part of the picture was probably the hand. I don't usually have too much trouble drawing hands, but attempting to depict one with color and volume without the help of an underdrawing or lineart...very frustrating. It went through a couple revisions.

It's probably obvious that realistic painted portraits are not my area of expertise (this is my first attempt since...high school, I think?) but hopefully Aunt Carol likes it.
Posted by Unknown at 1:31 PM