The Last of the Polar Bears - promo poster

This is the promotional poster for The Last of the Polar Bears. 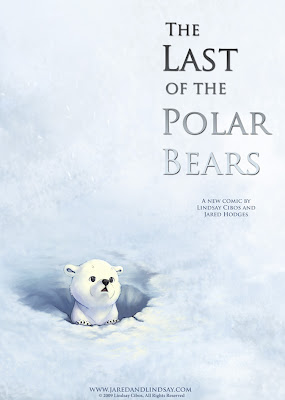 The Last of the Polar Bears is what will hopefully become my next graphic novel. I've spent the last year thinking about it and the last couple months writing and developing the groundwork for it. I just finished plotting out the story in detail from beginning to end, so now I'm ready to move forward with the creation of the comic itself!

This promo illustration, portraying an iconic scene from the first chapter of the story, had a pack a lot of punch with a minimalist execution. With so little detail, it wasn't difficult to draw, but every aspect of it needed to be just right.

I find it very helpful to create a number of tiny thumbnail sketches, to quickly try out different takes on an idea. Working with a general idea of a polar bear cub poking his head out of the den for the first time, finding himself surrounded by an unending sea of white snow, I created a couple of concept sketches: 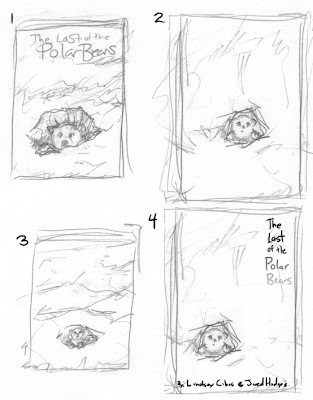 In these examples, note how composition, placement, and size of the cub play a big role in mood and feel.

#1 is a strong close up on the cub's face, grinning as he takes a peek at the outside world - cute, but completely at odds with the title of the book.

#3 is closer in feel - the landscape is vast, the cub is small--there's a real sense of loneliness going on, but it's so far pulled out from the character that scene no longer feels intimate.

#2 is almost right on target. The cub is cute and awestruck without looking too giddy. But the centered figure is boring and predictable.

#4 takes the aspects of #2 that I liked, but moves the cub into the lower corner. The title is placed in the upper right corner to balance the piece.

Once I had the composition figured out, I set about drawing the character.

He went through several drafts (including some slight variations with him smiling, not shown here) before I finally hit upon a version that worked for the poster. 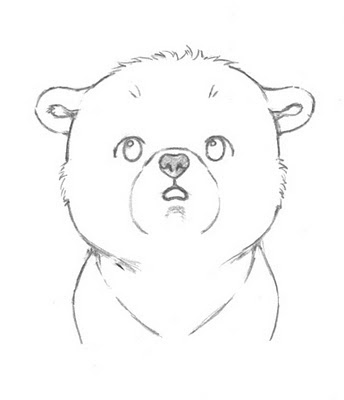 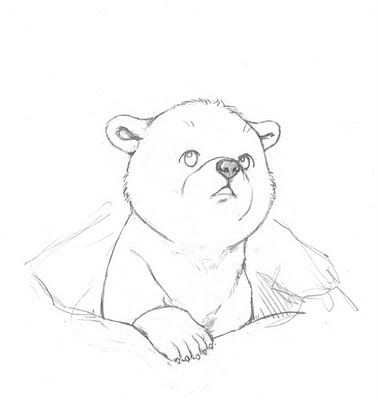 And here you have it, the finished line art of the cub seen in the poster (flipped in the illustration): 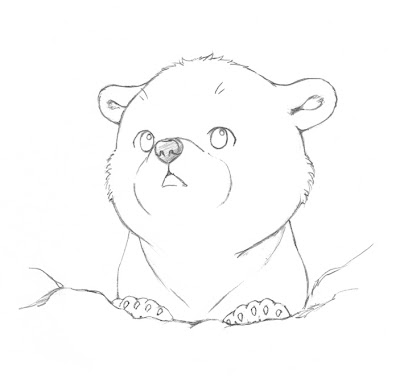 Stay tuned for lots more. I look forward to introducing you to this little guy and the rest of his family. :)
Posted by Unknown at 5:29 PM