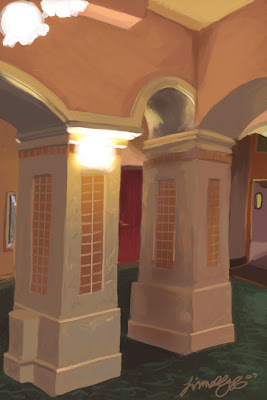 This speedpaint has the longest running time yet. I'm not sure if it's because I'm unconsciously getting more meticulous in my buildup, or if it's because of all sharp angles and details found in manmade structures. In any case, it took awhile, and that's with me rushing through the second column to finish it. Something interesting to note on this one is that I decided to do a line drawing at the beginning rather than jumping right into colors. I found I was making a lot mistakes with proportions on some of the previous speedpaints. Doing a drawing first helped reduce errors, because it allowed me to get a feel for the entire picture and quickly make adjustments to the spacing of objects.

Regarding the soundtrack, it comes from a little known SNES game called E.V.O.: Search for Eden. You start off as a humble fish, and as you eat and fight your way through stages, your character evolves. It's really a wonderful simulation of evolution in a platforming game. And if the music sounds reminiscent of Dragon Quest, it's because it's by Dragon Quest composer, Koichi Sugiyama. :)