While I'm waiting for the go-ahead to begin pencils for the next chapter of secret-comic-project, I thought I'd work on another piece for my children's illustration portfolio.

The original idea for this one was to have an Eskimo boy encountering a miniature polar bear in the snow. I liked the concept of having a small boy tower over what would normally be a very large animal. The miniature bear came across as confusing though, so in this revised version, the polar bear has been enlarged to make it polar cub size instead. 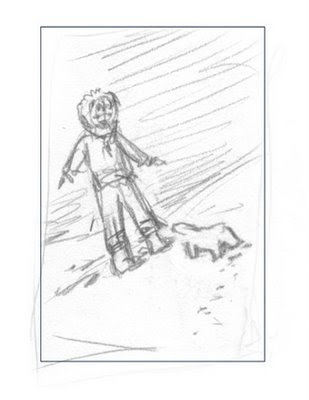 Jared suggested I work a fish into the composition to add further depth to the scene and give the polar bear cub a reason to approach the boy. So here's where the idea currently is with these three compositions:

Each has a slightly different feel. I'm currently leaning towards the middle one since you get to see both character's faces. But I'm curious to hear other opinions. Does anyone have a favorite?
Posted by Unknown at 12:37 PM