Boy and His Gator 2 - Complete 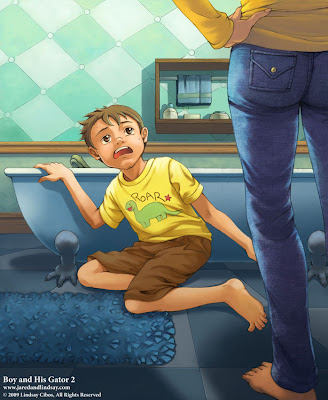 This is the second illustration in the three-part series, "Boy and His Gator". The first piece can be viewed here: [link]

In contrast to the first image, where I used cool shadows to give the scene an ambient, calm feeling of two friends sharing a private moment, for this second piece, I used warmer shadow tones. I felt that the red tones helped heighten the intensity and harshness of the scene. I imagine mom storming into the room and turning on the light.

Quick tutorial regarding the denim texture:
The denim texture comes from [link] (Thanks Messa for posting such a useful pack of textures!) After I finished painting the shadows and highlights on the jeans, I made a new layer, shrunk down one of the textures and stitched it together over the length of the jeans. Then I set the layer to soft light and 50% opacity. Finally, I used the dodge tool over the highlighted areas of the jeans to soften the intensity of the texture.
Posted by Unknown at 2:26 PM