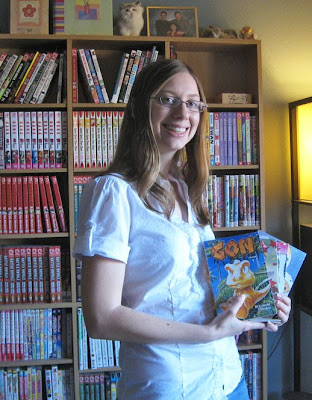 Here I am in front of my manga bookshelf, holding five new additions to the collection, courtesy of Jason Thompson (writer of the excellent Manga: The Complete Guide, and upcoming graphic novel, King of RPGs

) and his 365 Days of Manga contest. The contest is still ongoing over at suvudu.com, so be sure to check it out. All you have to do is fill in your name and address on the left side box, and you're entered to win five books from Jason's extensive manga collection.

, Kiichi and the Magic Books

v1-3. The artwork in Chikyu Misaki, by Iwahara Yuji, is adorable -- very cute characters in a unique sketchy inked style. I think the stand-out book in the pile, though, is Gon, which I can only describe as mix of mascot character cuteness with over-the-top hard-boiled action in the vein of Battle Royale

is this tough little dinosaur (set in a time after all the other dinosaurs have gone extinct), who is not above beating up other animals to get what he wants. There's no dialogue in the book--the story is told through actions alone. It's so well drawn that it's still very easy to follow. It's masterfully done. Very inspiring.